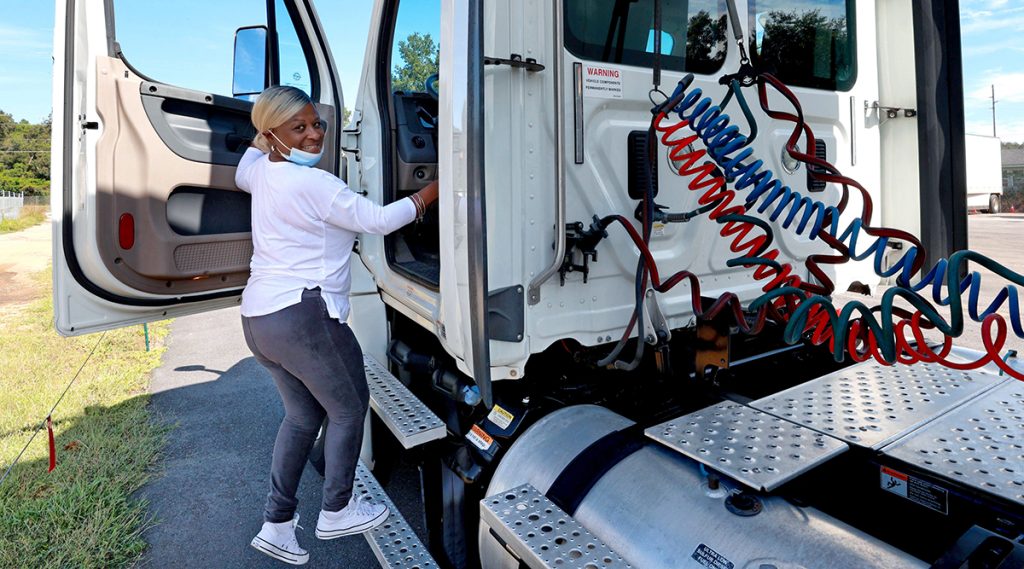 Jacqueline James has dreamed of driving a big rig ever since she was a girl.

At 52, the Orlando, Fla., resident is training to break into an industry long dominated by men. Her goal is to own and operate her own longhaul truck.

Florida Trucking Association says thousands of trucking jobs need to be filled in the Sunshine State, and a nationwide driver shortage is contributing to supply chain problems that are driving up prices ahead of the holidays and lengthening delivery times.

Trucking companies are offering sign-on bonuses as high as $15,000 to entice applicants with commercial driver licenses.

James, whose home care business was disrupted by the pandemic, saw an opportunity and enrolled as a student at Truckmaster CDL Training and Testing in Apopka, where she has been learning to drive a truck for the past week. She said she’s been mesmerized by trucks since she was a girl, and her goal is to have her CDL by Thanksgiving.

“I love traveling,” she said over the beeps of a truck backing up at the driving school. “I love driving. I love money. Put it all together, and it’s a win-win situation. I get to now drive around the country and get paid for it.”

The nation is short 80,000 truck drivers, according to American Trucking Associations. That shortage has existed for years, but the pandemic made it worse, said Alix Miller, CEO of FTA.

All types of drivers are in high demand, but the need is most acute in longhaul trucking, according to industry groups. Trucking is part of an extremely complicated global supply chain, but it’s a critical link with more than 72% of freight in the United States transported by truck.

Miller attributed the driver shortage to an aging workforce, a wave of early retirements during the COVID-19 economic slowdown and a surge in consumer demand when businesses reopened.

“We are suffering from a public-image issue, a misunderstanding of what a good career this is,” Miller said. “These drivers are professionals. Trucking affects every aspect of our economy. Everything you eat, touch, wear comes to you via truck. That impacts Floridians’ daily lives.”

Todd Spencer, president of the Owner-Operator Independent Drivers Association, said aspiring drivers should consider the pros and the cons.

“What happens is they burn out really, really quickly,” said Spencer, whose group represents 150,000 mostly self-employed truck drivers. “The work-life, the environment, the personal sacrifices are far greater than they ever imagined.”

Drivers can spend 70 hours or more a week working. They are away from loved ones for weeks at a time. Even finding a place to rest can be challenging because there aren’t enough overnight parking spots for big rigs, he said.

Most longhaul truck drivers are paid by the mile, instead of by the hour, meaning time spent waiting for loads or doing other work isn’t compensated, said Steve Viscelli, a sociologist at the University of Pennsylvania who studies trucking.

Drivers with more experience can make good money, provided they keep their driving record clean, he said. Wages have been rising, too, with the pandemic supply crunch. One trucking company, Roehl Transport, boosted pay twice this year to stay competitive, adding about $4,000 to $6,000 to drivers’ annual earnings.

Roehl ranks No. 73 on the Transport Topics Top 100 list of the largest for-hire carriers in North America.

“You still have some excellent jobs in trucking,” Viscelli said. “There are some great jobs that pay well and get you home at night where workers are respected and valued and make over $100,000 a year.”

Tra Williams, CEO of FleetForce Truck Driving School, said he’s seen more students than ever enrolling at his two locations, in Winter Haven and Bradenton, but the supply of graduates isn’t “making a dent in the demand.”

More needs to be done to meet the need, he said. Bottlenecks at some tax collectors’ offices in Florida mean people are sometimes waiting weeks and even months to take a written exam to get their learner’s permit to start training, Williams said.

“We celebrate people who want to be Insta-famous and influencers, and what we forget is the country is built by carpenters, electricians, truck drivers and the skilled-labor force,” Williams said. “You won’t have food on your shelves without truck drivers.”

Florida Trucking Association hopes to recruit more women to fill the gap with men making up about 90% of drivers. The average age of a truck driver is 49, and the group is among many pushing to change federal law to allow 18- to 20-year-olds to drive trucks across state lines. Right now, teenagers can only drive within the state. 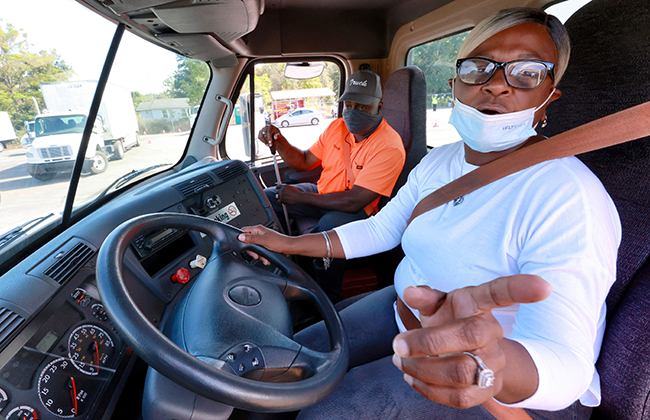 Byron “Truck” Simpson, who runs Truckmaster CDL Training and Testing, said the truck driving lifestyle isn’t for everyone. It’s a passion, rather than a 9-to-5 job.

He’s been driving a truck for more than 30 years and now has his own business teaching people how to drive a big rig. Depending on the student’s skill level, it takes about a month to complete the training, Simpson said. It costs about $2,000 to $6,000.

“You sit high, and you look low,” Simpson said. “It’s open freedom out there on the road. You have nobody standing over your shoulder telling you what to do. As long as you can deliver from point A to point B in a safe manner, you’re your own boss.”