Trucker Shares Tips for How to Stay Fit on the Road 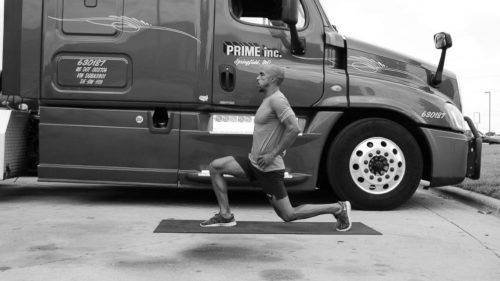 Rolling Strong and Women In Trucking (WIT) worked together this summer to better the health of America’s truck drivers through a two-month Accelerate Your Health Wellness Competition. The competition’s winner, William Velazquez, shared his experiences throughout the event and what he’s done since then on his fitness journey.

“You can make points every day,” said Velazquez. “The competition gives you points for heartbeat, steps, food you eat, and sleep. When the coaches guide and advise you, you get points also.”

Velazquez’s main focus for the competition was his heartbeat – “that’s what gives you the most points,” Velazquez said. According to Velazquez, the participant in second place kept maxing everything, so he worked to keep at 30,000 steps a day to stay ahead.

“I’m not all about winning, I just don’t like losing,” Velazquez said. “At the beginning, my strategy was just to let the other competitors set the pace, so the first two or three days, I kept close to them. As soon as I started getting close, I saw that the runner-up was doing more, so I kept up with him.”

As a truck driver, Velazquez plans his stops and divides up his day between driving time and exercising time.

“I wake up, I do an hour of mostly cardio to get the most points. Then, the rest of the day, I try to park away from the main doors of truck stops so I can walk the farthest. By 9 to 10 p.m., I’m usually done for the day and have most of the points. If I’m missing some, I have to walk out the 1,000 steps I’m missing. Once I took the lead, I didn’t want to lose. Like I said, it’s not about winning for me, it’s just about not losing.”

Velazquez noticed his body change throughout the competition, in addition to his overall endurance.

“I’m sleeping better, and I have a very healthy nutrition. My coach gives me advice on what to eat, so I look recipes up on the internet because I have to keep eating to keep up my energy, so I’m not burned out after exercising so much. I think the biggest change I’ve seen is that my muscles have grown. I joke around with my kids that I got a bee sting on my arm and that’s why it looks really swollen.”

Velazquez talks to his coach once a week, and spends half an hour talking about his goals, the foods he should eat, and the different exercises he should focus on.

“I have quite a few pieces of equipment in my truck; I have dumbbells and rubber endurance bands, but my main trick on how I do most of my exercises is that I have a mini trampoline inside my truck. So, it doesn’t matter if it’s raining or hot or cold outside, I can do my cardio and my steps inside of my truck.”

“The good thing for me is that I can do anything that I want, meaning the type of exercise I feel like doing. By the end of the WIT competition, I was feeling a bit overwhelmed to get the maximum amount of steps every day,” Velazquez said. “The best thing about the Rolling Strong competitions is that it makes you develop habits, so even when I’m not competing, I try to stay active every day. At this point, I am fine tuning different parts of my body. My main resolution for next year will be getting my abs in line.”

At the start of his fitness journey, Velazquez’s main goal was to lose weight. But now, it’s about much more than that.

“I’ve been losing weight over the past year – about 55 lbs. so far – but during the competition I not only wanted to lose weight, but I wanted to tone my body where I want it. In August alone I lost 5 to 6 lbs. From September to November, I lost another 5 lbs. It’s a lot of hard work, and it’s not easy. But I just want to be a better version of me.

“I’ve been active my whole life, but when I started driving, I started gaining weight. First, I said ‘I’m not going to abandon myself,’ but I just kept making excuses. I gained 50 lbs. over three years, so I told myself that I had to do something about it, and that’s when I made up my mind to eat better and get some exercise. It’s not easy, and you can’t do it overnight. You can’t go on a diet one day and expect to be 20 lbs. less. That’s why I want a healthier life and body. Now I feel stronger, more energetic. My muscle tone is more defined, which has me feeling good when I look at myself in the mirror.”

When asked what message he would send to the truck driver community, the answer was simple.

“It takes time and perseverance, so getting someone to help you along the way is important. I wouldn’t have gotten this far without the help of my family and my Rolling Strong coach, Claudia,” Velazquez said. “Just commit to yourself and don’t make up excuses. Stop leaving it for tomorrow.”