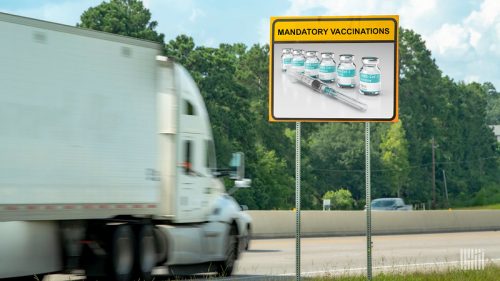 A second leading trucking trade organization has come out with a statement that doesn’t outright say it opposes the proposed Biden administration’s vaccine mandate but comes very close to it.

Like the earlier statement released by the American Trucking Associations, the Truckload Carriers Association, in a letter signed by its chairman, does not take a firm stand declaring that the mandate to vaccinate workers at companies with more than 100 employees is a bad idea. But the statement does say that the mandate “could have wide-reaching implications for our industry and the nation as a whole.”

One specific area of concern mentioned in the statement signed by TCA Chairman Jim Ward, whose day job is president of Maryland-based D.H. Bowman, is the difficulty in vaccinating a workforce of drivers who at any given time are all over the country. That would also extend to testing the unvaccinated, which a company would need to do for that subset of employees. Several other industry officials have described this as a key challenge.

“Obviously, the logistics of vaccinating an army of professional truck drivers operating in an irregular operating environment remains a strong concern,” Ward said in his note.

But the bigger concern is the mandate leading to drivers leaving the industry. “A larger fear is that a rule requiring a vaccine or weekly test could lead to a massive driver exodus from this great industry,” Ward wrote. “Already faced with a shrinking pool of drivers from COVID-19 itself, we are all confronted with the pervasive challenge of locating qualified drivers to deliver our nation’s freight safely, effectively and efficiently.”

The ATA statement did not make mention of a large loss of drivers. Rather, it raised another concern that others in the industry have expressed: that the hard cutoff at 100 employees will create a two-tiered system of companies that are required to vaccinate or test and others that won’t.

The ATA did not refer to the possibility of the smaller companies being in a stronger recruiting position, but that is an issue in the industry.

Ward’s note recommended that TCA members reach out to their respective members of the House and Senate “to explain the ramifications this plan could potentially have on our industry.”

“I encourage each of you to reach out to those that govern and tell your story so that we can effectively educate federal decision makers on this concerning issue,” Ward said.

One significant development that was unclear when the mandate was first announced, and which might have particular importance on trucking, is where the 100 employees are measured.

In a recent conference call, Ann Rosenthal, senior adviser at the Occupational Safety and Health Administration, said the 100 employees will be counted companywide, rather than at an individual facility. Her remarks were reported by The National Law Review.

However, there still has not been a full disclosure of all the details of the vaccine mandate.