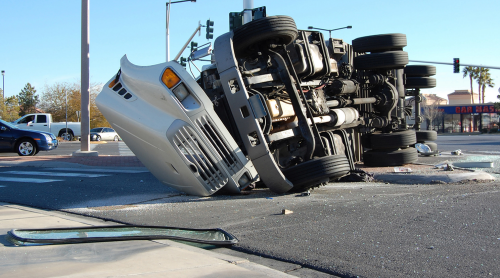 A team of trucking outsiders—made up of rocket scientists and automotive engineers—are working on a fifth-wheel solution to reduce the death and injuries caused by Class 8 truck and trailer rollovers on U.S. highways.

Large truck rollovers killed more than 300 people in 2019. Another 9,000 people are injured in Class 8 truck rollovers in the U.S. each year, according to the Insurance Institute for Highway Safety (IIHS).

Mechanical engineer Steve Krug, a former Tesla engineer with a background in aerospace engineering, founded Axicle Engineering to reduce highway deaths and injuries. His company’s fifth-wheel tractor anti-roll system (TARS) senses a tractor-trailer rollover before it happens and detaches the trailer from the tractor, allowing it to roll over on its own while keeping the truck driver safe inside the cab.

“Our impression of the Axicle fifth-wheel prototype is that it is a game-changer for the transportation industry,” Ryan Scott, a risk manager with Kysar Millenium Leavitt Insurance, told FleetOwner. “It can protect the two most important assets for a fleet owner: first and foremost, the driver, from potentially devastating injuries or loss of life from a turnover accident; secondly, the cab itself, which is an expensive item to replace or repair after a rollover accident.”

During the height of the COVID-19 pandemic in 2020, Krug was struggling to find a new job. He got together with some former Tesla colleagues who had worked on the Tesla Semi project. “We became aware that rollovers were an issue in the trucking industry and an unsolved problem,” Krug told FleetOwner. “So we just started brainstorming on how we could solve it.”

That brainstorming started with conceptualizing an entirely new design for tractor-trailers that would prevent rollovers. “But then we figured out that we could actually have a universal product that can be retrofitted or easily installed onto every single semi-truck that eliminates (rollovers) in the first place.”

Axicle’s engineering team, which includes SpaceX and Tesla veterans, developed the Axicle fifth wheel, which uses a series of sensors to constantly monitor the roll angle and rate of the tractor. Krug said his algorithm could detect a trailer’s threshold limits with 99.99% accuracy. And within 0.2 milliseconds of detecting a tractor rollover, the Axicle system sets off a controlled pyrotechnic actuator that opens the fifth wheel latch, decoupling the trailer from the truck, allowing it to tip over while the truck stays upright. A demonstration can be seen in this Axicle animation below:

Axicle has two pending patents covering the fifth wheel’s release mechanism hardware, software, controls, and trailer aerodynamics. It is currently trying to raise $10 million in Series A funding to back an initial production run of 10,000 units. If all goes to plan, Krug anticipates producing about 80,000 fifth wheels per year.

Axicle is also working on a public demonstration of the technology later this year at the Mojave Air and Space Port, which would involve driving a tractor-trailer behind a jet-wind blast to validate the fifth-wheel technology.

Krug noted that heavy-duty truck rollovers account for about $3.5 billion in estimated insurance payouts per year. Krug sees a big potential market among the 2 million Class 8 trucks in operation across the U.S. “We have potentially very high margins,” he said. “It’s low-risk tech from a technical standpoint in a super high addressable market, which makes it very attractive for venture capitalists.”

Krug said he already has about $30 million in preorders for the fifth wheel, which sells for “about $4,000” each. Those roughly 7,500 orders were made through Leavitt Insurance in the past month.

Scott explained the product could change how truck insurance is underwritten. “Trucks with the Axicle fifth wheel installed will qualify for many discounts—what we call in the insurance business ‘scheduled credits’—for both the auto physical damage coverage and also for worker’s compensation coverage,” he said. “What we’re anticipating is that when the scheduled credits are applied correctly, the insurance premium discounts will pay for the cost of the fifth wheel itself in three years or less. We at Leavitt have negotiated these scheduled credits with 15 of the leading truck insurance carriers in the world, including the Lloyd’s syndicate in London. We’re very excited to see the results.”

Other than “a couple of very small fleets,” Krug said that he has yet to approach fleets directly about the new technology. “All of us are outsiders in trucking, which might be a good thing because a lot of innovations come from outsiders. I have zero connections to trucking. I don’t even know a trucker. I have a friend who has a cousin who’s a trucker. And he said, ‘This is awesome. I would definitely buy this—especially if it makes me money.’”

You can read the full article here: fleetowner.com/safety/article/21173209/rocket-scientists-say-they-found-the-solution-to-semitruck-rollovers